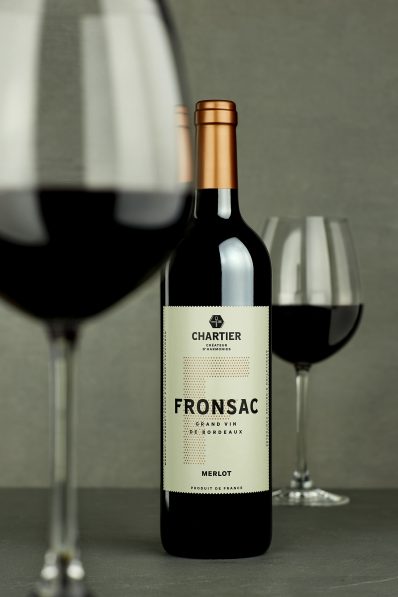 Discover the recipes for this wine

Born from the exceptional 2015 vintage, here is the sixth vintage of Bordeaux Fronsac elaborated, aged and bottled in Bordeaux by the trader-breeder François Chartier, with the complicity of the Bordeaux oenologist Pascal Chatonnet. Already the 2014 of this Bordeaux Fronsac Chartier was considered by some as one of the best Bordeaux sold to the SAQ under the bar of twenty dollars, with this 2015 of very high level, this vintage becomes an exceptional value for money.

The origin of the parcels of vines we have selected, vintages that we managed to assemble, as was the case since the 2014 vintage (and as is the case for the equally exceptional 2016 vintage that will follow this 2015), is found in the coast of the protected designation of origin Fronsac, located just west of Pomerol and Saint-Emilion. This year (2015) is characterized, as it was the case for the first time with the 2014, by a higher proportion of very old Cabernet Franc vines over 75 years old, which support with elegance and brilliance, enveloping it and textured merlot. The origin of the parcels of vines that we have selected, as well as the astonishing maturity, is also in the sector of the coasts from which some great Saint-Emilion wines come from, on limestones with asterias. Each variety is vinified separately and then assembled. The stay in barrels (in barrels of one and two years) was 14 months for this 2015, with a small percentage of new barrels, as this vintage had the structure to digest the new wood with elegance, while leaving room for more expression of terroirs, signature of Bordeaux FRONSAC CHARTIER since the very first vintage 2010.

This Bordeaux Fronsac, more than ever a high aromatic definition for its rank, shows a pulpy fruity that has the brilliance as ever, more walled and nourished, given the generous sunshine of the exceptional vintage that was 2015. The palate is voluptuous, full, dense and enveloping, almost New World style, for a Bordeaux wine, while maintaining a tight tannin grain bordelaise, more particularly like the wines of Fronsac. Black fruits, plum, coffee, mushrooms and sweet spices contribute to the aromatic profile. Certainly the greatest vintage of Bordeaux FRONSAC Chartier developed to date. Hard to find better red burgundy at this soft price.