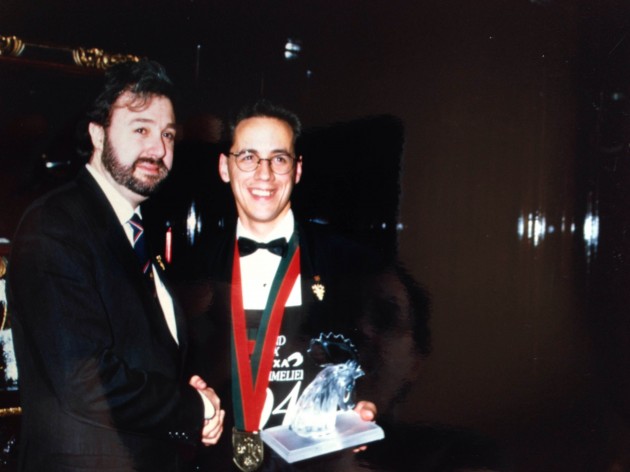 Once upon a December 12, in 1994, the day I won Sopexa best sommelier in the world in French wine and spirits, in Paris

20 years already. December 12, 1994, at the World Finals of the Grand Prix International Sopexa. The event would crown the world’s best sommelier in French wine and spirits. And what no one expected happened…
After two days of high level competition filled with one after the other of written and practical tests where the best sommeliers from 35 different countries duked it out, at around 10 p.m., in the sumptuous historic décor of the Opéra de Paris, Jacques Puisais, œnologist and founder of France’s Institut du goût, stepped to the microphone to announce which of the last two finalists — a Belgian and a Canadian no one knew — would be consecrated 1994’s World’s Best Sommelier in French Wines and Spirits.
Puisais, who is nothing short of a guru of good taste, was building the suspense and finally made the announcement, slowly parting his lips, almost in slow motion like in a silent movie: “Monsieur Frrrrrrrrrrraaaaaaaaaaaaançois Chartier, Canada, nouveau meilleur sommelier au monde en vins et spiritueux de France!” Bang!
I will never forget that incredibly emotional moment that felt, despite being incredibly happy, like being punched in the face. I was stunned! Shocked. Shocked because, neither myself, my wife and coach who was there with me, the roomful of crème de la crème guests from the world of wine and gastronomy — the vast majority French, of course —, were expecting the “normal” victory of a French sommelier rather than that of a completely unknown Canadian one…
The rest, as they say, is History, I think ☺
Be that as it may, this victory didn’t happen on its own. I wish to thank once again, as I did on stage on December 12, 1994, my mentors: Jacques Orhon (who taught me sommellerie at École Hôtelière des Laurentides, in 1989), Don Jean Léandri (technical director at the Canadian Association of Professional Sommeliers), Philippe Nusswitz (Best Sommelier in the World at the 1986 Grand Prix Sopexa), Philippe Faure-Brac (Best Sommelier in the World 1992), Ms. and Mr. Massenavette (of restaurant La Clef des champs, in Sainte-Adèle), the Sangoy family (Les Millésimes restaurant, Gevrey Chambertin, France), Champlain Charest (Bistro à Champlain), Marie and Philippe Filipovic (Le Marie Philip restaurant, Saint-Sauveur), Patrick Pagès (Hostellerie Chantoiseau, Vialas, France – rest in peace, my dear Patrick), to name but a few, and last but not least, my sommelier colleagues of the day, Stéphane Lortie and Jean-Philippe Lefebvre (we were the Three Musketeers of Québec sommellerie), who, thanks to their devotion in the study and understanding of the complex viticultural universe, constantly pushed me to surpass myself.
If you are interested in discovering everything that participating in such a competition entails — the countless hours spent studying, tasting, travelling, not to mention the efforts and sacrifices required — don’t miss the documentary film Au Pif ( http://tv5.ca/au-pif ) that will air on TV5 on Tuesday, December 16, 2014, at 9 p.m. The movie follows Québec sommelière Véronique Rivest as she participates in the 2013 Best Sommelier in the World contest, in Tokyo, where she finished a close second. I was there with her and experienced intense emotions, as I had myself finished in third place at the 1995 edition of that same competition. Véronique is truly the First Lady of sommellerie, being the first ever woman to climb on the podium of an international sommellerie event of this magnitude.
Let me paraphrase de Gaulle and say… Vive la sommellerie! Vive la sommellerie québécoise! 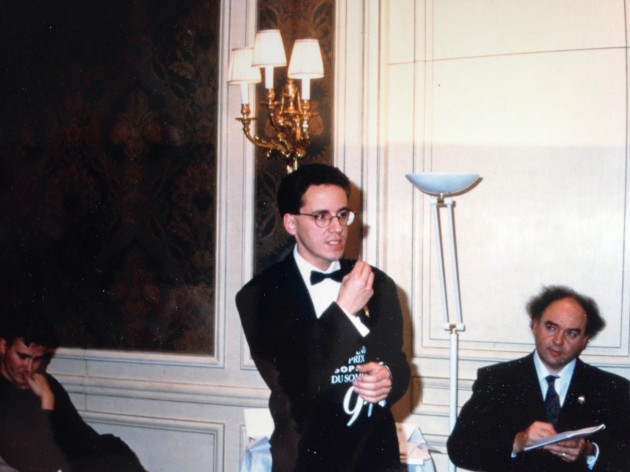 “Chartier in action during one of the oral tests at the Grand Prix Sopexa in Paris in 1994, with on his right, who search his every move, the French sommelier and chef, the late Patrick Pagès, who was one of his mentors. “