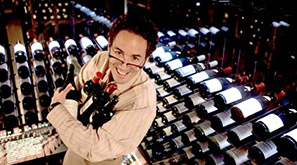 Starting in June 2013, the Lowik Media production team will begin filming the documentary The Pleasures of the Scents.

This documentary, highlighting the work and passion of the famous *Créateur d’harmonies* François Chartier, chronicles the quest that revolutionized the world of gastronomy. Revealed in his groundbreaking book Taste Buds and Molecules – awarded the prestigious accolade World’s Best Innovative Food Book, at the 2010 Gourmand World Cookbook Awards in Paris – it expanded our understanding of the aromatic molecules present in our foods, our wines, and even in our day to day lives!

Written by Laurie Finstad Knizhnik (Durham County, Bliss, …) and directed by Kim Nguyen (Rebelle/ War Witch, La Cité/The City, Truffe, Le Marais), this documentary is an invitation to partake in this aromatic universe, which remains a great mystery to many of us.

Thanks to the participation of the Bell Fund and the LVL studio team, an iPad and iPhone application and a Web site are being developped along side the cinematographic production.

The documentary will be presented at world film festivals and screen in theatres before it airs on the Documentary Channel and TV5 with the financial support of Documentary, TV5, Sodec, Bell Media Fund, Transit Films and Canadian Media Fund..