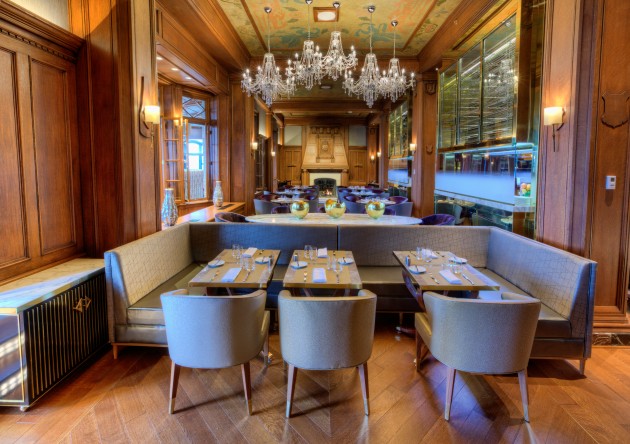 Ivanhoé Cambridge today unveiled the results of its major restoration of the Fairmont Le Château Frontenac, one of the world’s most iconic and photographed hotels. Following an initial investment of approximately $9 million for masonry work and for the replacement of the copper roof of the building, a second investment of $66 million was allocated to reposition the hotel, bringing the total investment to approximately $75 million. These investments enable the Château Frontenac to continue its long tradition of unmatched hospitality in a new contemporary spirit that respects its history.
“This major investment perfectly illustrates our ability to invest in a way that strikes the right balance between preserving a heritage building as prestigious and admired as the Château Frontenac and taking into account the requirements for performance and returns of a hotel asset,” stated Daniel Fournier, Chairman and Chief Executive Officer of Ivanhoé Cambridge. “The history of this prestigious hotel, which has long been the face of magnificent Quebec City — and in fact of Quebec as a whole — is deeply entwined with that of all Quebecers.”
For his part, Robert Mercure, General Manager of the Fairmont Le Château Frontenac, commented: “Our goal was to renovate this icon while preserving its heritage and adding a contemporary aspect so that we can offer our guests an unprecedented experience and meet their highest expectations.”

Completely transformed rooms
Close to 330 rooms have been meticulously and entirely transformed, thereby creating a new room category called “Deluxe Contemporary,” that add very modern conveniences and continue to highlight the Château’s unique architecture while meeting the needs of the most demanding travellers. Fairmont Gold, the boutique hotel within the Château, has also been fully modernized, with the number of rooms increased to 60 from 46 and its private lounge expanded. The Fairmont Gold rooms are located on the hotel’s upper floors, providing the finest views over Quebec City and the St. Lawrence River.
Three totally revamped restaurants and bars
The hotel’s culinary experience has been transformed and reinvented, led by experienced executive chef Baptiste Peupion, with the introduction of three new concepts. Le Champlain restaurant, the hotel’s signature dining room, offers an exceptional culinary journey leading to discovery of a new Québécois cuisine, created by chef Stéphane Modat and enhanced by collaboration from François Chartier, sommelier and harmony creator, who produced the wine list and works with chef Modat to design some tasting menus. Le 1608 wine and cheese bar offers a wide array of Quebec cheeses, perfectly matured in a cheese cellar, and has an unmatched selection of wines by the glass chosen by sommelier Chartier, as well as “cheese, condiment and wine” packages devised by this master of pairing. Le Sam, the evolutionary new bistro, provides a lively culinary experience with creative dishes, afternoon tea and innovative mixology.
Significant upgrades to business-hosting capacity
Following the renovation of the hotel’s meeting rooms and its famous Salle de Bal, business customers can now benefit from a 75% capacity increase in meeting and banquet space over 23 multifunctional rooms equipped with a remarkable technological infrastructure and offering superb views of the famous Dufferin Terrace or St. Lawrence River.
Common areas transformed
The transformation of the main lobby has provided for the addition of refined elements and unique items that fit in with carefully maintained and restored historical details. A large backlit blue onyx panel, inspired by the majestic St. Lawrence River, greets guests at the reception desk, while the grand Salon Rose stairway is now home to an impressive 4.6-metre-high (15 ft) chandelier custom-made from thin pieces of glass representing ice cubes, in homage to Quebec winters. Finally, the hotel’s fitness centre area will be significantly increased in the next few weeks.
A contemporary space in a historic place
Other enhancements to the guest experience include construction of the Spa du Château Frontenac, with seven care and treatment rooms, as well as a renovated and expanded health club. The hotel’s history and more than 400-year-old site are highlighted through the meticulous positioning of artifacts dating back four centuries, in specially designed showcases.
A new roof
The Château Frontenac’s famous copper roof has been restored, and extensive masonry work has been done to protect the building’s integrity and help it continue through the next decades.
The concept and design of the Fairmont Le Château Frontenac renovation program were developed by the design firms Rockwell Group and Wilson Associates, and Jean Dallaire Architects was the principal architect of the project. Of the $75 million invested, more than $56 million went toward contracts with Quebec firms. The hotel is managed by Fairmont Hotels & Resorts and is solely owned by Ivanhoé Cambridge. Since first opening in 1893, the hotel has been an unequalled symbol of culture, history, elegance and hospitality. Built as the ideal spot for passengers on the Canadian Pacific Railway to stay, it was designed by New York City architect Bruce Price, who drew inspiration from the architectural styles of the Middle Ages and the Renaissance.
To celebrate the end of this great metamorphosis, the Fairmont Le Château Frontenac is offering a Nouveau Château package, including accommodation, breakfast for two, a $50 restaurant credit, and early check-in and late check-out, subject to availability. The offer is effective June 1, 2014, and starts at CA$359 a night, plus taxes, for double occupancy.