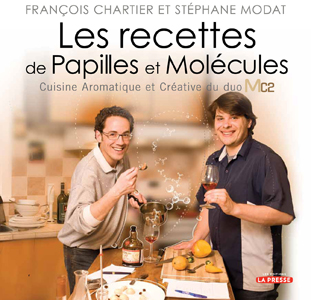 After learning the theory, it is now time to experiment with François Chartier and Stéphane Modat!

With unexpected food combinations that possess complementary aromatic signatures, the 85 recipes from the book will undoubtedly surprise and delight the masses.

In the spring of 2009, François Chartier introduced us to the gourmet science of the principles of Molecular HarmonyTM and Molecular SommellerieTM with the book Taste buds and Molecules. After several weeks at the top the charts, this first volume was crowned “Best Innovative Cookbook in the World” at the 2010 Paris World Cookbook Awards. In partnership with chef Stéphane Modat, the maestro returns and proposes Les Recettes de Papilles et Molécules, which will allow everyone, budding chefs and culinary professionals alike, to spring into action and bring the revolution to both glasses and plates. Because in the end, these new harmonies are synonymous with pleasure: the pleasure of wonderful cooking, of course, but also of eating and raising our glass. With this book, François Chartier replaces traditional food and wine pairings with more diversified “liquid harmonies”, including beers, cocktails, sakes, eaux-de-vie (fruit brandies), juice and even consommés!

Nevertheless, as impressive as François Chartier and Stéphane Modat’s culinary creations may be, they remain accessible. All of their recipes are based on ingredients that are available most everywhere and at reasonable prices, and can be achieved by everyone. Truth be told, you will have no excuse not to pursue this new aromatic adventure!.