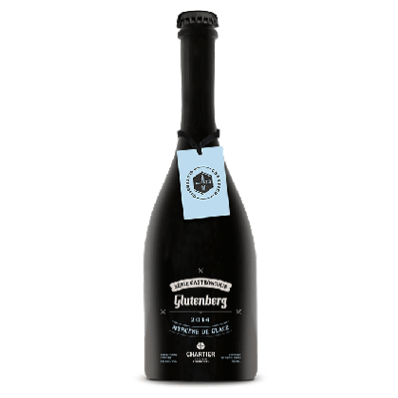 At the crossroads between a beer and an icewine, the Myrcène de glace was frozen during the maturing phase to concentrate its aromas and flavours, simulating the effect of cold used to develop icewine. The added marc and must found in Vidal from the Léon de Courville vineyard (Domaine les Brome) highlight the aromatic power of this grape variety and its mango and lychee notes. In symbiosis with the myrcene, the molecule that provided the aromatic trail during the creation of this fine beer, the synergy literally increases tenfold!

This beer pairs wonderfully with blue cheese, gingerbread and foie gras, as well as with mango, lychee, pink grapefruit, ginger, apple, thyme, Italian parsley, coriander, nutmeg, juniper, lavender and rosemary-perfumed dishes, to name only a few. Serve it in a glass the same way you would serve a great wine.

The Myrcène de glace, sold in 750 mL format with a 7% alcohol content, is very aromatic and quite rich, exuding exotic mango and lychee tones, and resembling the Vidal grape (Vidal must and marc) used to brew it. The “Brassin spécial,” sold in 500 mL format with a 10% alcohol content, has a more golden and sustained robe, and its range of flavours is not unlike the aromatic fruit tones of the Vidal, with a backdrop of real freshness created by fern and grapefruit hoppy notes, and a hint of menthol/anise found in wintergreen and sweet fern. This beer offers a surprising depth and complexity, bearing a resemblance to a great Vidal icewine!

Once sipped, the Myrcène de glace, sold in 750 mL with a 7% alcohol content, reveals a texture so similar to a white Vidal wine that even an experienced blind taster would believe he is drinking a sparkling Vidal! Sheen, freshness, originality and persistence. The “Brassin spécial,” sold in 500 mL format with a 10% alcohol content, has a nose that unfolds with uncanny richness into full flavours and a dense body with an assertive flavour, like a Vidal icewine, but without the sugar. Two unique beers that will delight the amateur in search of new sensations, as well as those who are looking for new gastronomic harmonic pleasures. Holidays and the beginning of winter will never taste the same once you have tried our two Myrcène!