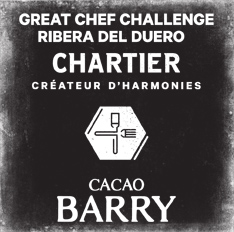 “A RECIPES AND PAIRING CONTEST INSPIRED BY WINE AND CHOCOLATE”

François Chartier “Créateur d’harmonies” and the chocolate company Cacao Barry have teamed-up to present Québec’s chefs and professional cooks the first edition of a contest inspired by the aromas of Chartier’s Ribera del Duero Chartier and the aromatic richness of Cacao Barry’s chocolates. The grand finale of this contest will be held during the Salon International des Vins et Spiritueux de Québec, on March 15, 2015, at 14 h.

The challenge participating chef’s must rise up to is the creation of a savoury dish (tapas, entrée, main dish or cheese) using Cacao Barry’s Plantation and Origins range of chocolates while staying on the aromatic path of Chartier’s Ribera del Duero Spanish red wine (available at SAQ) both for the creation of their recipe as for the perfect wine and food pairing.

“Pairing chocolate with red wine in a recipe aligns perfectly with the creative and innovative direction Cacao Barry has undertaken with the development of our ITINERO™ application, which allows everyone to explore the universe of aromas that harmonize with our Origins and Plantations range of fine chocolates. Obviously, when one thinks of harmonizing aromas, one thinks of Chartier Créateur d’harmonies! This collaboration with Chartier is an incredible opportunity for us to deepen our knowledge of harmonies with chocolates, especially with Chartier’s Ribera Del Duero, which was itself created to be along the same aromatic path as chocolate,” explains Andrea Doucet Donida, director of marketing for Cacao Barry Canada.

Chartier’s great range of wines available at SAQ was created and crafted by and for food, with pairings in mind, first and foremost, going as far as featuring the ingredients on the same aromatic path on its label.

“There could be no better partner than Cacao Barry with whom to encourage chefs and professional cooks to explore the many aspect of creating savoury recipes with chocolate and of this chocolate and red wine pairing,” enthuses François Chartier.

Details and dates for chefs and cooks

Entering the contest will be open to chefs and cooks starting Dec. 8, 2014, and until Jan. 12, 2015. They can do so by writing to the address: concourschartiercacaobarry@gmail.com

Entering a creation and its images will close on Jan 26, 2015. Each candidate will be required to make a brief presentation (250 words max.) of the recipe, including the ingredients and seasonings used, the Cacao Barry chocolate they used and, obviously, how they were inspired by Chartier’s Ribera del Duero for the creation of their dish and their impression of the harmony between this Spanish tempranillo and their recipe.

To create their dish, chefs will have access to the free ITINERO™ app as well as to the book Taste Buds and Molecules, The Art and Science of Food and Wine.

Three semi-finalists selected by an expert panel will be announced during the week of Feb. 9, 2015. Each of the semi-finalists will be invited to participate in the grand finale that will take place during the Salon International des Vins et Spiritueux de Québec, before an audience at the Espace Exquis, on March 15, 2015, at 14 h. They will stay for free at the Fairmont Château Frontenac, one of the partners of this first edition of the Great Chef Challenge.

Members of the public will also get to participate to this Great Chef Challenge by voting for their favourite recipe on Facebook between February 2 and March 2, 2015! A People’s Choice prize will be awarded to the public’s favourite chef at the grand finale during the Salon International des Vins et Spiritueux de Québec, on March 15, 2015. Two prizes for members of the public will also be randomly drawn on that occasion: the first for people who voted at least once on Facebook and the second for people who shared the contest on social media at least once.

The public segment of the contest allows chefs to share their recipe — and, above all, their creativity and talent inspired «by» wine — over social media as well as giving the public a voice, and a great source of inspiration, in the Great Chef Challenge.

Ever since the creation of Cacao Barry®, the company has passionately devoted itself, body and soul, to creativity and innovation. It all began in 1842 with the quest of its founder, Charles Barry, who set out to explore Africa, seeking the best cocoa beans to create his first genuine connoisseur chocolate. In 1923, the company goes global: Cacao Barry becomes the first chocolate manufacturer to study the possibility of cultivating cocoa in Latin America as well as on other continents. Whether through its rare couverture origins range of chocolates, the aromatic refinement of its first Plantation Millésime, the revolutionary QFermentation method or its new Itinero™ app – a free mobile app that helps chocolate lovers everywhere find the perfect chocolate pairing – Cacao Barry has relentlessly raised the bar for itself and the whole chocolate industry. Cacao Barry is part of the Barry Callebaut Group, the world leader in chocolate- and quality cocoa-based manufacturers. It now resides in Canada at chocolate’s new address of residence: the Chocolate Academy™ of Montréal.

François Chartier is regarded internationally as one of the pioneering researchers in terms of recipe creation and wine and food harmonies. Robert Parker says he is “Pure genius!”, while Ferran Adrià and Juli Soler qualify him as “the number one expert on flavors”. Since winning the prestigious Best Sommelier in the World award in 1994 (Grand Prix Sopexa, Paris), François never ceased renewing himself and relentlessly pursuing his research. He published the first results of his research in *aromatic harmonies and sommelerie* – discipline he created in 2004 – in his book Papilles et Molécules (Taste buds and Molecules). In 2010, the book was awarded Best Innovative CookBook in the World, at the Gourmand World CookBook Awards in Paris.

In October 2013, François Chartier Créateur d’harmonies launched his very first range of European wines at SAQ, wines he created and crafted by and for food. His wines were an immense critical and popular success, with over 20 000 cases sold to this day.